Learning how to “do board better”

Challenge: UCAN (United Coalition for Animals) is a spay and neuter clinic. The problem of pet overpopulation and abandonment raises human emotions. Animal-focused nonprofits often attract passionate people who love animals and want to prevent them from suffering. It was just such people who started UCAN, populated its board and hired its staff. The leadership of UCAN realized they needed to change in order to move forward with a clear 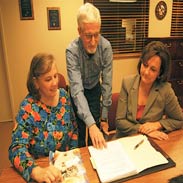 and consistent vision. “We needed to learn how to ‘do board’ better,’ commented Monica Weakley, Board President.

Solution: The ESCC project team that was brought in to help began by conducting one-on-one board interviews which created space for UCAN to focus on the direction of the organization and got board members thinking about how they fit. “The benefit of bringing in outside experts,” Weakley said, “is that it underscores to the board itself the importance of investing in board development.” The second step in the process ESCC suggested was to hold a board retreat in order to build confidence and consensus among members and to get to know one another better. Since then, the UCAN board is functioning at a more purposeful level. It is recruiting members based on needed skill sets; it has improved communications among board members, and has learned how to build cohesiveness and consensus.